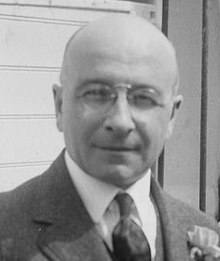 Over the course of the last week I have encountered the name Alexis Carrel in two wildly different contexts, neither of them good.

Notably influential on the Islamists has been Catholic fascism in its French version—namely, the Catholic monarchism of the Vichy scientist Alexis Carrel, who dreamed of restoring the medieval grandeurs. (Meanwhile he advocated gas chambers as a way of getting rid of inferior people—even as he worked at Rockefeller University in New York!) To abolish modern alienation was precisely Carrel’s concern.

The man in the middle of it all was Alexis Carrel, a brilliant and rather dapper Frenchman working at the Rockefeller Institute in New York. Carrel discovered that, if you remove some cells from the body, sit them in a nutritious broth and handle them correctly, they can not only survive, but thrive and multiply. Also, if you take some cells from one culture, you can start a new one and, with that, a third, and so on. The importance of this technique – know as cell “passaging” – can’t be overstated. With it, Carrel literally opened a new era in cell research. Unfortunately, he did so with an experiment that, while earning him international superstardom, proved to be a complete and utter train wreck.

Carrell’s affiliaton with Rockefeller University piqued my interest and I was able to find a quote from Maclyn McCarty’s book, The Transforming Principle, that jogged my memory of where I’d heard of him before:

So Carrel is responsible for introducing Rene Dubos to Oswald Avery and therefore, to the extent that wise recruitment counts, can claim to have brought antibiotic discovery to The Rockefeller University. Carrel was also a nobel laureate whose award was given “in recognition of his work on vascular suture and the transplantation of blood vessels and organs” and whose subsequent work on cell culture led to the controversy in the above article. His Nobel bio says he joined the French Army in (1914-1919) and developed a chlorine-based antiseptic for treating wounds.Theres not much about the time between 1919 and 1939 when he accepted a position with the French Ministry of Health, and ended up staying in France and running an Institute of Health set up by the Vichy Government.

Although his association with the Vichy government is well known, as is, apparently, some of his more unsavory eugenic-opinions, I am still missing the vision of “Catholic monarchism” that Paul Berman claims as inspiration to the Islamists. Google: help me out…… Maybe it was as a justification for anti-darwinism? Or, a critique of modern materialism (from Terror and Liberalism):

But what Qutb liked about Carrel was his condemnation of modern materialism and its encroachments on the values of man, the humanistic side of Europe’s extreme right - and not Carrel’s scientific approach to the modern crisis …

Hmmm…. I will need to read a bit more about Carrel. He stands at the crossroads of a number of historical currents. And how did his opinions and science play out at Rockefeller? He would have been a contemporary of Jacques Loeb and that may have led to some powerful clashes. In his fantastic book “The Professor, the Institute and DNA” , Rene Dubos has some strong words about Jacques Loeb (the book is a biography of Oswald Avery and the story of the early Rockefeller University). Loeb was a leading proponent of reductionism - wishing to understand biological systems from their most basic components – and he vigorously championed this idea, scorning “medical science”, which he viewed as a contradiction of terms. According to Dubos, Loeb’s spirit permeated and won the early intellectual environment at Rockefeller, successfully shaping its future direction:

I am finding it intriguing to imagine that Carrel and Loeb could a) work well together and b) not have come to loggerheads. It would be interesting to see whether the views that Carrel held later in life - devout Catholicism, proactive eugenicist - were already awake during these early Rockefeller years (~1912) and whether these views were held secret. I think its time for a little more background reading.